=" DJ Diva-The MIXTRESS of R and B | Monday Mixtape: The Denzel Principle with Jimi Izrael 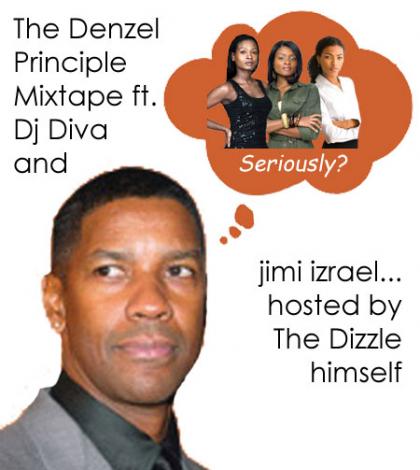 This mixtape is a step out of the box. Jimi Izrael contacted me and requested that I do a mixtape for the release of his new book “The Denzel Principle- Why Black Women Can’t Find Good Black Men”.

This was a new experience for me..I took his selected readings…read by the Dizzle himself and laid them over popular instrumentals. I took some of the most recent R&B and hip hop songs and placed them between the tracks.

Jimi talks about everything in this mix and it is extremely controversial! He starts it off with Da Dizzle– talking about the Denzel Washington effect on women. Jimi then goes into the Booty Scale where he rates the various aspects of  white female hindparts. He has a diatribe against Kevin Powell…he really doesn’t care for him as you may be able to tell! Ejaculation Negotiaton starts off talking about just that but it ends with a poignant twist! Birds and Bees is a talk that Jimi wants to have with his daughter when she is of age…really as blunt and straight forward as he can be! Jimi has a problem with Essence magazine too and he tells you all about it! if your girl has a lot of friends…then you need to listen to Peeps. He talks about the generational curse of Single Motherhood which almost made me mad enough to stop production (I’m glad I didn’t). In Exhale he talks about Terri McMillian and you know he goes in on her messed up gaydar! and in the final selection of The Lesson he talks about an important childhood experience and how it affected his life.

I know you will have a good time listening to this. Please purchase the book at Amazon.com (link provided) I’ve read it and you will be laughing, sighing, crying and cursing from cover to cover!

Thank you for choosing me to do this mix Jimi, I hope you sell a million copies!

You can also purchase the book at:

9 comments for “Monday Mixtape: The Denzel Principle with Jimi Izrael”